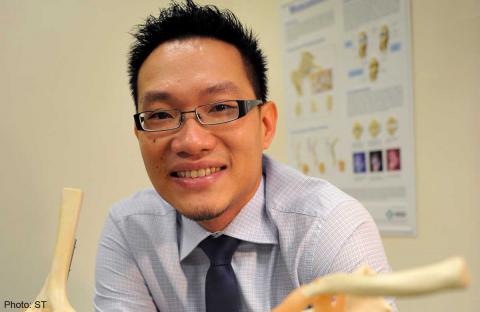 S’pore Doc Talk: The Key to Making Sure Less is More (AsiaOne YourHealth)

Dr Tan is an orthopaedic surgeon specialising in the shoulder, knee and elbow at The Orthopaedic Centre (Novena) at Mount Elizabeth Novena Specialist Centre. Dr Tan shared his views on minmally invasive procedures like keyhole surgery in Mind Your Body (The Straits Times) on 12 July 2014.

SINGAPORE – How far would you go to give your patients less?

It is now a trend for patients to come prepared with questions and, sometimes, they will even tell you what they want from the treatment.

Increasingly, they are asking for less, not more.

They want smaller scars, fewer incisions, smaller implants, less foreign material in their body, less radiation from scans and so on.

I try my best to give them less.

After telling my patients that they have an orthopaedic injury and need surgery, I usually lighten the mood by saying that the surgery would be done using a keyhole technique with small incisions and minimal damage to surrounding tissues.

Patients usually feel slightly better knowing that the recovery is going to be faster and less painful.

In order to do the keyhole operation, I use suture anchors.

These are special implants that help me to sew up tears in the tendons. They allow surgeons to repair and reconstruct torn structures in the body. They are generally made of high-quality surgical-grade metal, plastic or biodegradable material.

The questions I encounter about metal implants are whether they will set off airport metal detectors, cause aches during cold weather or have to be removed routinely.

The answers are maybe, unlikely and no.

However, metal suture anchors do interfere with imaging studies, distorting the images and making them harder to interpret.

A funny story that I heard from doctors in developing countries is that they always use metal anchors so that they will show up clearly in the X-ray scans later.

The patient will then count the number of anchors used and tally it with his bill.

On the other hand, when patients hear that the suture anchors are made of plastic, they will question whether they are strong enough, if they will degrade over time and whether it is harmful to have plastic in the body.

The answers to those questions are yes, no, and unlikely.

Biodegradable suture anchors are probably more acceptable to patients because they will be absorbed by the body over time.

However, part of the reabsorption process does cause inflammation of the joint, which leads to pain and swelling in some patients.

I often tell my patients not to worry about suture anchors and the benefits of keyhole surgery should outweigh the concerns they have about them.

But sometimes, even less is not enough.

There was that one particular patient whom I remember clearly. She was a laboratory technician at a university research facility.

She had a rotator cuff tear in her shoulder that needed repair but she was against having any suture anchors implanted, regardless of what they were made of.

I offered her the traditional repair without any suture anchors, but she was not keen after hearing that the scar would be 5cm long, five times the size of incisions made during keyhole surgery.

She was quite distraught and the consultation ended with her saying that she would live in pain until there was some other solution for her.

At that time, the technology for “implantless” keyhole rotator cuff repair was not available here.

I travelled to France to learn more about this new technique.

After undergoing training there, I began performing the rotator cuff procedure here. I operated on her a year later.

I have always felt that it is a good thing when surgery can be done through smaller and fewer incisions. It is not only cosmetically pleasing, but fewer incisions also mean less trauma to body tissue and this translates to less pain, less bleeding and a faster recovery.

I am sure many surgeons have seen patients, especially girls, tear up when they are told that they need surgery.

They do not seem to care all that much that they have a serious injury. All they can think about is the unavoidable scar on a very visible part of the body.

Once, I encountered a young mother who fell and broke her collar bone.

I could sense her dread when I told her about the need for surgery involving metal plates and screws.

But her face lit up when I said that using a special rod, instead of the standard plates and screws, can reduce the size of the scar from 6cm to 1.5cm.

This procedure, however, took longer than usual as it was more technically challenging.

In general, surgeons should not be in too much of a hurry to remove parts of the body, even for those that have broken down.

Everything in the body has its own special function.

The knee is an excellent example.

I had a patient with a torn anterior cruciate ligament (ACL) who asked me how much of the damaged ligament was left intact.

I explained that the best way to know would be to examine the inside of his knee with an arthroscopic camera.

“Can you leave the uninjured part alone? Don’t remove everything. God made this ligament and nobody can do a better job than he,” he said.

I agreed with him.

Afterwards, I removed only the torn and non-functional part of the ligament and left alone whatever was intact. This is known as selective bundle reconstruction of the ACL.

There are two distinct bundles of fibres in the ACL. This technique allows doctors to reconstruct only the torn bundle, leaving the intact bundle behind.

It may be more technically demanding but removing less healthy tissue makes sense.

Nobody can do a better job than your maker, not even an orthopaedic surgeon with an inflated ego.

Book an appointment with us or contact us to find out more about keyhole surgery today.